We must rebuild trust between Government and the governed – Osinbajo 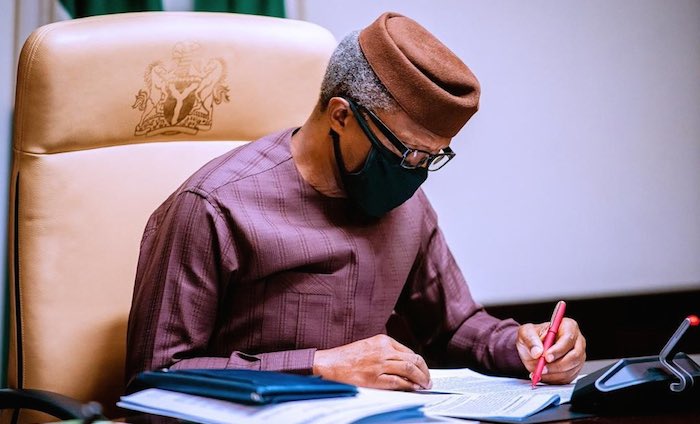 As the federal government begins efforts to rebuild critical assets destroyed during the EndSARS protests, Vice President Yemi Osinbajo on Monday, called for a process that will guarantee a rebuilding of the trust between the government and it’s citizens, including moral, social, and ethical reconstruction to be undertaken as well.

Trust deficit has been largely attributed as one of the major factors that fuel the crises and Osinbajo said the government must rebuild trust between it and the governed, between law enforcement agents and the communities that they are meant to serve, adding that ” Never again should law enforcement find itself on opposite sides of any conflict with society”

The Vice President stated this while speaking at the launch of the Rebuild Lagos Trust Fund, on Monday, following the protest that led to a colossal destruction of public assets

The Vice President noted that the rebuilding of trust was necessary because the country cannot afford to alienate her young people who constitute the majority of the society and bear the burden of enterprise, resourcefulness, and innovation required to propel its economy into the future.

“For their sake and ours, we need a broad-based and inclusive prosperity that creates opportunities on a scale commensurate with the aspirations of our population.”

The VP who added that the task of reconstruction goes beyond physical infrastructure or brick and mortar, said “there is a moral, social and ethical reconstruction to be undertaken as well. We must rebuild trust between the Government and the governed; the vast majority of who are young persons; trust between law enforcement agents and the communities that they are meant to serve. Never again should law enforcement find itself on opposite sides of any conflict with society.

He also charged governments at all levels to put in place mechanisms for rebuilding the morale of the nation’s police force, “the gallant men and women who daily brave the elements to keep us all safe. The process of reform has commenced.”

He also assured that there would be comprehensive justice for all affected Nigerians.

Osinbajo, on behalf of President Muhammadu Buhari, extended the Federal Government’s “commiserations to the government and people of Lagos State for the loss of lives of citizens, the injured, and the colossal destruction of public and private properties, social amenities and infrastructure.”

Lagos, Nigeria’s commercial nerve centre, was both the epicenter of the #ENDSARS protests and the destruction that followed a few weeks ago.

Noting the unfortunate loss of lives and property in Lagos and across the country, the Vice President added that the whole nation was in need of healing and the Buhari administration will pursue restorative justice for all affected.

According to the VP, referencing President Buhari’s commitment to justice, “these deaths should never have happened. It is now our responsibility to honour their memory and ensure that justice is comprehensively served.

“Our State, like our Nation, is in need of healing. We recognize that the balm for a wounded society is truth and justice. This is why judicial panels of inquiry have been established all across the country. Their mandate is to investigate cases of police brutality against citizens, and where necessary compensate victims.

“Specifically, in Lagos, the mandate of the inquiry has been expanded to include a full investigation of the Lekki toll gate incidents. This process has begun and all Federal Agencies and the armed services are participating actively as Mr. President said, and I quote, ”We will also ensure that all those responsible for the misconduct or wrongful acts are brought to justice.”

“The pursuit of restorative justice, recompense for injury to innocents, and a reckoning for perpetrators of abuse are essential components of the moral and ethical reconstruction of our homestead. I urge all of us to give this process a chance to work and to commit to the advocacy and participation that it will take to enable this process to succeed.”

He lamented how the EndSARS Protests which was conceived as a noble cause and designed to call attention to a serious malignant problem of brutality and extrajudicial killings, was subverted leading to the exact opposite of its objectives, chaos, murder, looting, and arson.

“We saw what can happen when the restraints of law and order are loosed and anarchy is given free rein.”

The Vice President again emphasized the commitment of President Muhammadu Buhari’s administration to reform the Nigeria Police Force and address the root issues that led to the protests.

“In those difficult days when chaos swept from street to street consuming lives and livelihoods, we learned that society is built on the balance between freedom and order. But we have also realized that order itself is a social construct sustained by the consent of the governed.”

He called for public and private collaboration in the rebuilding and reconstruction of the State, which he noted had not experienced such a level of wanton destruction in the past.

“On the Federal Government’s part, Mr. President has said that he will await a full report from Your Excellency (Lagos State Governor) and I am sure that will be on hand soon. For businesses that were destroyed, the CBN has been developing a plan to suspend existing facilities that they may have in banks and lines of cheap credit to help them rebuild their damaged facilities and re-stock.”

While describing Lagos as Nigeria’s commercial nerve centre, the VP made reference to the socio-economic ripple effects the State has on the nation as a whole.

The Vice President added, “perhaps it is worth emphasizing that the destruction and disruption of life and work in Lagos is a national tragedy and a major economic setback for the Nation even as we face the most difficult economic challenges in our generation caused by the COVID-19 pandemic.

“This is the State that leads by far in the collection of non-oil revenues. The bulk of VAT is generated here. The Lagos port, whose Marina office was attacked, generates the most revenue, and is the busiest in the Nation; the Lagos airport is the busiest in Nigeria. In so many ways our fortunes as a Nation are closely tied to the fortunes of this great State.”

According to the Vice President, the government will continue to make efforts to improve its engagement with the youth and all Nigerians, while it continues the process of holistic reforms of the Police.

Osinbajo made a firm proposition for the integration of young people in the new task of repositioning society.

Osinbajo stated that the reformed Police Act and the Police Trust Act signed by the President were part of the government’s efforts in improving the Police while ensuring the rights of Nigerian citizens are protected.

“After 70 years of the Police Act, Mr. President signed the new reformed Police Act 2020 into law. The new law contains in many parts components of a charter of the rights of citizens when being questioned.

“The President has also signed into law the Police Trust Act, essentially to provide a source of extra funding for the police. Equally, the Police has also initiated its community policing programme aimed at reframing policing as an activity based on trust between law enforcement and the community,” the VP said.

The Vice President also commended the leadership shown by the Lagos State Governor, Babajide Sanwo–Olu, throughout the challenging period.

“First, Mr. Governor, you led your State’s efforts in addressing the COVID-19 Pandemic to both local and international acclaim. When State Governors under the auspices of the National Economic Council (NEC) resolved that States should establish judicial panels of inquiry, Lagos was the very first state to constitute its inquiry. Your actions have been an example of responsibility, creativity, sensitivity, and resolve under pressure.”

The VP added that “Lagos and the Nation at large will emerge from this crisis better and stronger,” while noting that, “even in the darkest of clouds bear a silver lining. These trying times offer an invaluable learning opportunity, a teachable moment, and it is the lessons we draw from this period that will shape our path going forward.”

Earlier in their separate remarks, Lagos State Governor Babajide Sanwo-Olu and the Central Bank of Nigeria Governor, Godwin Emefiele, called for collaborative efforts in rebuilding Lagos, emphasizing that the level of destruction could not be handled by the State Government alone.

Emefiele then pledged the support of the organized private sector in the rebuilding of Lagos State which he noted would include the reconstruction of destroyed police stations by the private sector coalition and supporting affected private businesses to survive the devastation.

Other speakers at the event were the representative of Senate President, and Senator representing Lagos-West Senatorial District, Olamilekan Adeola, and the Speaker of the House of Representatives, Femi Gbajabiamila, among others.

The Rebuild Lagos Trust Fund Board led by Yemi Cardoso was inaugurated at the event.