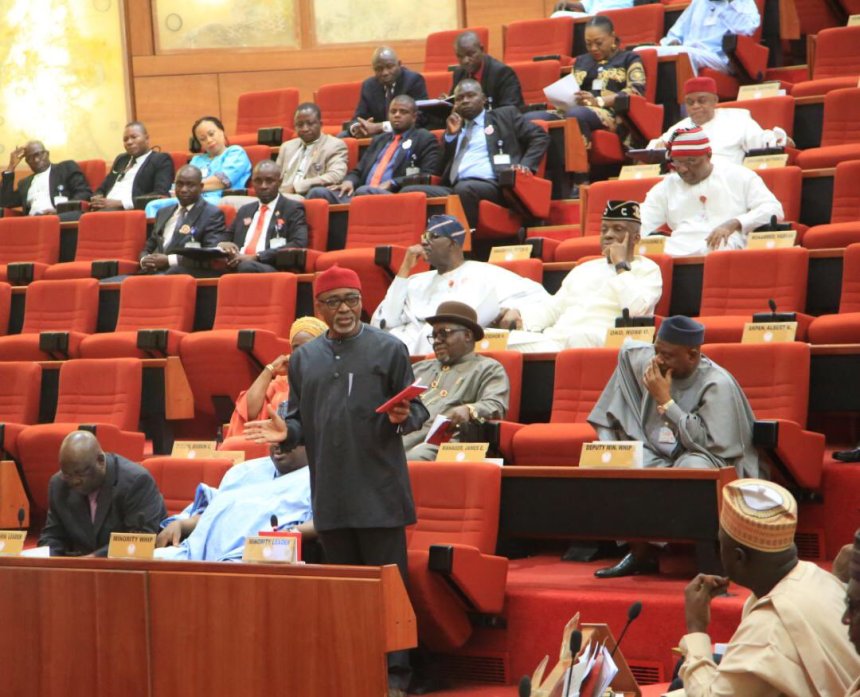 The Senate, in less than 10 minutes on Tuesday, passed a bill that seeks to amend the Companies and Allied Matters Act 2004.

The bill, sponsored by the Senate leader, Abdullahi Yahaya, was read for the first time on December 10, 2019 and scaled second reading on February 27.

The Senate passed the bill in May 2018 to, among others, make it possible for individuals to register their companies from any part of the world.

The bill came 28 years after the passage of the original Companies and Allied Matters Act and is expected to make Nigeria the best country in Africa to do business in.

It was transmitted in May but was not assented to by President Muhammadu Buhari.

In November 2019, the president wrote to the Senate seeking an amendment to a section of the law.

In his letter, Mr Buhari amended Section 26(5) of the law to preserve the powers of the Attorney-General of the Federation to approve the registration of companies limited by guarantee and reflect the ease of doing business principles in a veto order (1) of 2017 on the promotion of transparency and efficiency in the business environment.

Tuesday’s passage of the bill was moved by the Deputy Senate Leader, Ajayi Boroffice, who noted that the bill contains 869 clauses.

The lawmakers thereafter, resolved into the committee-of-the-whole to consider and pass the bill.

The Senate President, Ahmad Lawan, suggested that the bill be considered by 50 clauses each, due to number of clauses.

It will enhance Nigeria’s business environment and make it competitive among its international colleagues and it is a good start for small companies and young entrepreneurs, given the provision for single ownership of small private companies, he explained.

He also said it will promote the use of technology and eliminate all unnecessary regulatory provisions for small companies.

“It is expected to reduce the minimum share capital for companies and startups in Nigeria. The introduction of e-registration system will ensure global access to registration of companies and Increase in foreign investment through the creation of a new legal entity,” he said.

Mr Yahaya further noted that the business reform happening now is long overdue as Nigeria’s legal framework for business is in dire need for the same in order to achieve the much desired growth and attract investment.

The Repeal and Re-enactment of the CAMA Bill when passed to law, will have the overall effect of making the Nigerian corporate law more in tuned with today’s business realities, improve the business environment, as well as mitigate direct compliance costs for businesses in Nigeria, he said.

He added that the necessary amendments have been made as requested by the president.

All the senators including the Senate President, Ahmad Lawan, who spoke about the bill, supported its passage as many urged the Senate to fast-track the process.

The bill was thereafter read for the second time after a voice vote and referred to the Senate Committee on Trade and Investment to report back after a week.

The bill, if signed into law, is expected to provide significant benefits to companies by reducing red tape and making it easier to comply with regulatory obligations.

The amendments are aimed at encouraging investments that will allow small businesses and startups thrive, lower costs and ease regulatory burdens. Changes included in the bill will mean that many of the over 75,000 private companies limited by shares which are established in Nigeria every year will be able to incorporate more easily.

In addition, small companies will no longer be required to have a company secretary or hold Annual General Meetings and the requirement for statutory declaration of compliance has also been removed.

Minimum share capital required for companies to be registered has also been reduced to encourage more investments in small companies; and individuals will no longer need a lawyer to register a company.

The House of Representatives is expected to pass the same bill after which it will be transmitted to the president for assent.