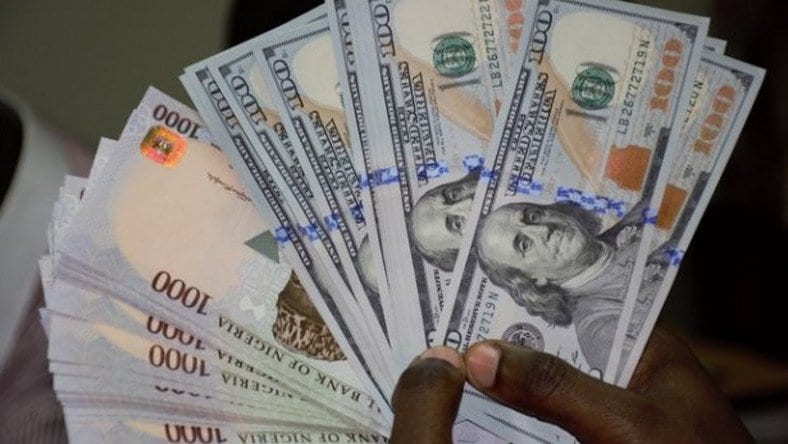 Nigeria’s naira rose slightly against the U.S. dollar at the official market on Wednesday, a day after the currency slumped to a record low at the spot market.

The currency strengthened to N430.00 per dollar on Wednesday from N431.00 it traded at the Nafex window in the previous session on Tuesday, data posted on the FMDQ website where forex is officially traded, revealed.

At the parallel market, the currency weakened to N705 per dollar amidst shortfall in foreign exchange supply as demand increases.

Analysts have blamed the continuous weakening of the naira on rising import bill, dollar savings and the accumulation of cryptocurrencies by Nigerians who have lost confidence in the local unit due to its massive devaluation against the greenback currency.

However, Iniobong Williams, a crypto trader and founder of Willywealth Trading, blamed the Central Bank of Nigeria’s foreign exchange policies for the recent slump.

He said the announcement that Nigerians buying dollars with naira will be “arrested” made by the CBN governor, Godwin Emefiele, a few days ago also further weakened the naira.

“I believe this has caused tremendous panic among middlemen who try to breach the gap for those in need of FX because CBN cannot meet the high demand,” Mr Williams said.

Also, he said there is also a huge demand now for forex among students who want to pay their school fees and that most students resort to buying from the black market because of the long queue at the bank as a result of limited availability of foreign exchange.

“The demand for FX is high right now while supply is limited, hence the hike in exchange rate,” he added.

The Senate on Wednesday resolved to invite Mr Emefiele over the free fall of the naira in recent weeks.

Mr Emefiele was asked to appear before the Senate in plenary and address the lawmakers behind closed doors.

The lawmakers, however, did not fix a date for the governor to appear. On Wednesday, the lawmakers also resolved to embark on a two-month recess that will end on September 20.