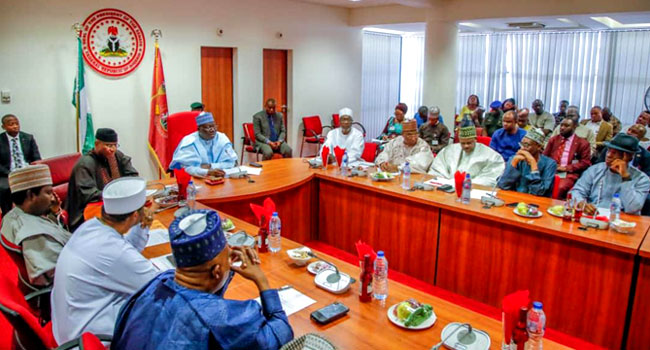 The Senate has called on the Federal Government to sanction security agencies found culpable of vandalising pipeline installations and facilities in the country.

This came as it also asked the FG to introduce a pollution tax on those engaging in illegal refining of crude products in oil-producing areas.

The chamber made the resolution after a motion moved by Senator George Thompson Sekibo (Rivers East), and co-sponsored by seven other lawmakers.

Sekibo raised the alarm that the incomplete crude refining process had taken a more dangerous dimension in Rivers State.

The lawmaker warned that the situation had the potential of turning into a national emergency if not quickly addressed.

He said, “The sooty particulate substances dropping in the state is becoming too visible that one cannot stay outdoors without receiving drops of them on his body.

“It has become more worrisome that they are seen on bedspreads in bedrooms, worktops in kitchens, chairs and other materials in houses, meaning that they are entering through every available crevice into inner spaces of buildings as the wind carries them.”

“Residents in Rivers State have noticed lots of these sooty particulates settling in their nasal tracts which have occasioned cleaning of their nostril several times in the day.

“This may be the cause of the recent cases of deaths without noticeable ailments in many towns of the state.”

According to the lawmaker, an environmental audit due to the degradation of the environment has never been carried out since the commencement of the exploration and exploitation activities in the area which has lasted for over 60 years.

He accused some security agents deployed to the region of aiding oil thieves.

The lawmaker said, “Some security agents posted to secure these national assets have turned themselves to partners in these dastardly acts, thus giving the criminals impetus to openly commit these national economic crimes.”

The senate, therefore, urged the President to use his constitutional powers to support the government of Rivers State to combat the criminal activities and fish out the national economic saboteurs.

It mandated the Senate Committees on the Navy, Police Force, Interior and Army to carry out holistic investigation of these illegal activities with a view to ascertaining those involved in these dastardly acts and report within four weeks.

The Senate further directed its Committees on Environment, Petroleum Upstream, and Primary Health to visit Rivers State and carry out an observatory assessment of the level of damage these activities have caused the environment and the health concern the activities have occasioned, as well as suggest solutions and report within four weeks.